At church last Sunday, we were blessed with a powerful testimony of faith.

After leaving the God is a Brown Girl Too® Retreat, a number of participants stopped by a gas station on their way through Manhattan.  Between the excitement of saying good-byes, giving directions and jumping

back into cars, someone lost their wallet.  She didn’t realize it until she got back into her car and was approaching Brooklyn.

Unfortunately, by the time her attention turned to the wallet, she had been maneuvering through traffic on I-95 and the last time she had seen the wallet was when she laid it on the hood of her convertible.

A car hood is a vulnerable place to have a wallet sitting on any moving vehicle — not to mention on top of one in fast-moving traffic on a NYC highway.  The steps that one would have to retrace to locate it would be impossible to recreate.  Here, the various scenarios of it flying off into oblivion would be too numerous to imagine, especially because the last point of contact — the gas station — was miles away in the distance.   But

after such an extraordinary women’s retreat, only faith filled the hearts of the passengers concerned about the missing wallet.

Charged with faith, one of the passengers called the gas station.  One counseled the driver to have faith that the wallet would manifest.  Another passenger used her faith to pray for a favorable outcome.  And after she was ministered to, the driver decided not to worry about her wallet.  With faith, she continued

driving to Brooklyn and left the matter in the hands of the universe.

When she faithfully got out of the car to drop off her first passenger, she witnessed what she called a “miracle.”  Her wallet was still sitting where she had put it — not in a fold or a crease — but right on her hood!  It was as though divine order had converged the centrifugal force of space and time and gravity to suspend the wallet in its right place — so that it was not thrown or tossed, but simply rode atop the car —

with all of its contents intact.

Faith is not a power to be taken lightly.

Faith pushes us out of the realm of appearances and posits us in the reality of unlimited good.  Faith pulls us away from the consciousness where we simply ask God — and connects with the super-consciousness where our good has already manifested.  Faith catapults us beyond asking to believing that whatever we ask for, we

receive.  Faith blesses us with a patience beyond human comprehension — to know that our good is here.

Faith is one of the 12 powers we are studying.  Although the foundation for our study is a book that Charles Fillmore wrote in 1930, entitled The Twelve Powers of Man (Unity Books), we are now able to expand our interpretation of the 12 powers within according to the teachings of our more ancient ancestors  — who developed a basis for spiritual power centers thousands of years before Fillmore was born.

The pineal gland — located in the brain behind the eyes — is said to be the physical entry of spiritual enlightenment, and through that illumination, it is also known as the gateway to faith.  It is the home of higher consciousness, healing power, and psychic perception.  In her book, Opening to Spirit, Caroline Shola Arewa, an expert on African teachings on the healing power of the

chakras, says that melatonin is excreted by the pineal gland, which encourages receptivity to the creative consciousness of Spirit.  Melatonin levels, Arewa says, are at their highest between the hours of 4 A.M. and 6 A.M., producing the best consciousness to create, meditate, and be more open and receptive to Spirit.

Our Faith Power is associated with deep indigo blue energy, which is said to be the color associated with the deep blue of midnight — an energy that radiates outward and encompasses all things with

compassion and connection to all life.  It is in the evening, through dreams that Jacob receives spiritual messages.

The Bible says, in that place called “Peniel” (or Pineal), he “sees God face-to-face” — and his life is spared.  He is reborn in a new consciousness.  In the Spirit, one could say that his Pineal gland was opened.  The Bible says that the sun rose above him as he passed Peniel.  He saw with new light.  When we tap into and turn on

the power associated with our Pineal Gland, our Faith organ, we see God face-to-face.

Peter represents Faith in the Bible.  He sometimes faltered, but he was also more steadfast than the other disciples.  He was the only one who actually tried to walk the water. 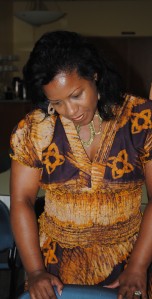 About SPIRITMUV:  Spiritmuv® is a trans-denominational church, which means that it transcends the confines of religion and teaches unconditional love for one another regardless of race, creed, culture, or religion.   At the heart of its teachings is what Jesus taught — that we love one another, as well as the community that Mahatma Ghandi inspired when he said, “I am a Christian and a Muslim and a Hindu and a Jew.”  Reverend Cecilia Loving is the founder and creator of Spiritmuv, which was formed in 2007.  Services are held for an hour every Sunday, from 2:30 P.M. to 3:30 P.M. at the Unity Center of NYC, located at 213 West 58th Street.

Rev. Loving, author of Prayers for Those Standing in the Edge of Greatness, is the sole owner, creator and administrator of God is a Brown Girl Too®, which holds annual retreats and workshops.  The next God is a Brown Girl Too Retreat will be held April 1-3, 2011, at the Mariandale Retreat and Conference Center.

Join the Spiritmuv  Community at www.Spiritmuv.ning.com for special postings by Rev. Loving.

None of the content herein may be copied or otherwise used except with Reverend Loving’s written permission.