York City, I am reminded of the sins buried in this country’s soil.  We know but seldom speak of the past rapes and sexual assaults upon enslaved Africans by predators not so different from Strauss-Kahn: criminals whose only defense is their own self-aggrandized status.  We watch with sickened dismay as one judge trumps another’s remand of Strauss-Kahn to Rikers and sends the elitist French man home with his wife.  His wife even rented an apartment just for him to wear his ankle bracelet.  With these shenanigans, miracles seem far beyond the grasp of African hotel housekeepers from the Bronx and only within the reach of millionaires who can afford them.  Where are the stats, I wondered, on the frequency with which poor folk are indicted and then sent home to await their fate in

the projects.  But then I remembered, Rikers Island is full of accused people who can’t afford the 24-hour watchman, $1 million cash bond or $5 million insurance bond that Strauss-Kahn purchased.

Perhaps the miracle is that law enforcement even managed to pull Strauss-Kahn, who was a potential candidate for the President of France, off Air France two minutes before his plane took off.  He appeared to be fleeing.

Perhaps the miracle is that a judge presided over the initial bail hearing who had the foresight to remand Strauss-Kahn before he escaped to his vacation home in Marrakech.   “Remand” means go to jail.  If she had not sent him there immediately, it is likely that he would not have hung around for an indictment.  He could have lived outside America’s jurisdiction in either France or Morocco.  That means he would have never been tried for the indictment now issued by a Grand Jury.

Perhaps the miracle is that a young woman who managed to escape the horrors of her native Guinea, where rape is widespread, gained asylum in America where she at least has some recourse against attackers.  Perhaps

the miracle is that Strauss-Kahn’s DNA was collected swiftly enough to match the samples taken from the hotel housekeeper.

Staring in the face of overwhelming evidence,  Strauss-Kahn’s legal team is counting on the miracle of a

consent defense.  But the “she-wanted-it” defense seems preposterous in view of the housekeeper’s steps to report the attack without delay.  Or perhaps it is only preposterous to those of us who seriously doubt that a hard-working woman, a religious woman, a woman single-handedly raising her daughter had the luxury of engaging in Strauss-Kahn’s consensual game.  Supposedly, he had tried, without success, to gain the attention of other hotel staff who apparently – like the victim – rebuffed him.

Perhaps the miracle is that the cry of rape took so long to catch up with Strauss-Kahn who has a reputation of  attacking women.  Apparently, he did not limit his inappropriate attacks to the staffs of hotels.  But his crime, if convicted, would be consistent with the reports of many housekeepers concerning the unsavory misconduct of hotel guests.  Only a notorious man could be used to shed light on such a notorious abuse of service.  After all, we’re not just the maid – not just another statistic to add to the abuse of domestic workers worldwide.  Perhaps the miracle is that for now, some semblance of justice prevails. 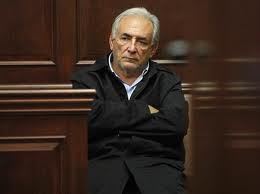 But we live in a world where common decency depends upon miracles and blatant misconduct can be bought by a good lawyer.  So this is what I am praying for: that good does ultimately triumph, that justice does prevail and that we open our eyes to see the marginalization, denigration and mistreatment of women everywhere.  The miracle that I am praying for is that the housekeeper is able to transform her life completely by moving from victimhood to victory.  She has served so many for so little; it is time that the system serves her.  The miracle that I am praying for is that not only does she win her criminal case but that she wins a civil case against the accused – if he is found guilty.

I pray that all of those who suffer at the hands of racism, sexism, classism and all of the other –isms are vindicated for their suffering.  I pray that we offer our collective consciousness to the deliverance of systematic brutality, violence and abuse of women everywhere.  I pray that we all grow to respect ourselves as the gods that we are and stop limiting ourselves by the confines of second class citizenship that someone else has created.

“Jesus raised Lazarus from the dead,” they say.  “Jesus turned water into wine.  Jesus made the blind see.  Jesus expelled demons from the flesh.  Jesus made the lame walk.  Jesus multiplied fish and bread.”  But Jesus taught us that our ability to experience miracles is commensurate with our faith.  He says again and again, “by your faith you were made whole.”  If we have faith that no one is more blessed than us, or is more gifted than us, or has priority or preference over the miracle that God manifested as us, then every decision we make will bring us closer to the realization that we are our own miracle.   We can then open our eyes and see God for the first time in everything that we say and everything that we do.  We can accept the good right within our midst.  We can be brave enough to do onto others as we would have them do unto us.  We can be extraordinary in the ordinary spaces of our life.  We can open the door and not be dragged by our hair but step into the power of all that we desire to take shape.

Perhaps the miracle is that we actually second-guess God when we know that Spirit loves us and protects us and liberates us from attackers with justice. Each one of us is blessed to carry out a divine purpose – known only to us, etched somewhere in the divine ethers of our soul – patiently waiting for us to manifest – to perform, to be, to do what we are called to demonstrate.  The  Prophet Jeremiah teaches us in the 1st chapter of Jeremiah that God said: “Before I formed you in the womb I knew you; Before you were born I sanctified you; I ordained you a prophet to the nations.”

It is miraculous that we know that we are doing the right thing – what we were called to do – because the desire is so deep and so nagging and so insistent – that we won’t be satisfied until we accomplish it.  We are here to trust our own anointing – to push ourselves beyond the boundaries of where we wanted to give up.

The miracles in our lives say – yes we can.  Yes we can experience life the way that we want to experience it.  Now is the time for each one of us to realize that we have the power to be the good that we were called to be; and the miracles that we need are already here, waiting for us.

In the Bible Joseph survived to become a leader after his brothers sold him into slavery and told his father he was dead.  In Genesis,

Joseph told his brothers, “you meant it for evil but God meant it for good.”  Those are the words of miracles.  Perhaps Strauss-Kahn’s evil will result in good.  Perhaps a nameless housekeeper will be able to achieve better dignity, respect and protection for many others in that industry.  And so, I say, let us become the housekeeper’s prayer.  Let us pray for those who serve us and for those of us who serve.  We need to believe today that we have the power and strength to overcome any challenge and defeat any outlaw.  Let us see ourselves winning as her – that witness in ourselves that lives to stand strong and be obedient to the Great Spirit.  Let us gird her with the inexhaustible supply of the universe deep within our souls and remember that we are divinely connected.
Let us summon the ancestors to right this wrong, to reveal any attacker as the criminal that he is and spare us from the arrogance of those who believe they are above the law.

Remember, this is our season.
This is our miracle.
This is the time for our own magic.

About SPIRITMUV:  Spiritmuv® is a trans-denominational church, which means that it transcends the confines of religion and teaches unconditional love for one another regardless of race, creed, culture, or religion.   At the heart of its teachings is what Jesus taught — that we love one another, as well as the community that Mahatma Gandhi inspired when he said, “I am a Christian and a Muslim and a Hindu and a Jew.”  Reverend Cecilia Loving is the founder and creator of Spiritmuv, which was formed in 2007.   Services are held for an hour every Sunday, from 2:30 P.M. to 3:30 P.M. at the Unity Center of NYC, located at 213 West 58th Street.

Rev. Loving’s new book is now available God is Brown Girl Too, as well as Prayers for Those Standing in the Edge of Greatness.

Copyright 2011 by Cecilia Loving.
None of the content herein may be copied or otherwise used except with Reverend Loving’s written permission.

Join the Spiritmuv  Community
at www.Spiritmuv.ning.com for special postings by Rev. Loving.