Every time I tell someone that I teach yoga, they respond by saying something like, “I can’t even touch my toes,” or “Do you have to stand on your head?” Most people assume that their body must be pretzel-like before they can do yoga.   What they don’t understand is that the practice of yoga is far richer than touching one’s toes and much more than the mere movement of one’s body. Yoga has been marketed with images of quirky, tattooed, thin, new age, free-spirits sitting in a lotus position, or posing with one leg stretched up to the heavens, or standing contemplatively on their heads.  So many people attend yoga classes hoping to tie their legs behind their necks, tone their bodies without becoming “bulky”, or sweat profusely in the hope of melting away excess pounds.

Western culture has placed more emphasis on the physical rather than the spiritual aspect of yoga, despite the

profound transformational  potential of this ancient, spiritual practice on body, mind and soul. I found my way to my first yoga class in 1995.  I was in my twenties and living in Hollywood pursuing the life of an entertainer.  Ironically, I was also battling the demon of depression.  The path my life as a singer no longer felt fulfilling.

life and was unable to free myself from them.  I needed desperately to change my life — both in terms of my career and my personal relationships, but I didn’t know how to begin.  I really didn’t know how to re-direct my energy.  Moreover, I had no idea who I really was beyond the person that I had turned into.

I knew that the latter was not me, but I didn’t know who I was beyond the identity that I’d developed so far.  I was afraid.  Fear devastated me.  I was living in darkness.  And in this darkness, I was blind. But something led me to the Hollywood Y, a place where I could teach step aerobics and stretch classes.  So when I took my first yoga class, I did it merely so that I could  learn new 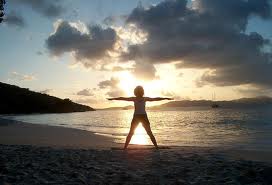 stretches to incorporate in my fitness classes.

The yoga class was held on the basketball court upon a sea of thick, blue and gray Velcro-attached gymnastic mats.  The teacher, a brown man draped in a white, cotton loin cloth and a crown of bound “locks” spoke very little, like a guide. All I remember about the physical poses was standing with my arms at my side and breathing (tadasana, the mountain pose), standing on one leg and breathing (vrksasana, tree pose), and lying on my back and breathing (savasana, corpse pose).  What I never forgot was how the brown man spoke.  He was gentle, calm, compassionate, loving.  He wasn’t speaking to the physical me; he was speaking to my soul.  He was moving in oneness with my spirit.

And for the first time, in a long time, I felt an inner peace, that flowed from my own spirit.  I remember how quiet I became inside.  He guided my mind towards my breath, breathing in and breathing out, in and out.  There was peace in the breath.  There was peace in the stillness.   I found comfort.  I could begin again in the darkness.  I could breathe through it; and it wasn’t as foreboding. When I thought about the transformation that I had witnessed through the love of  breath from my own body, I was moved to tears.  I cried on my walk home.  Ninety minutes of standing, rolling, moving, breathing . . . .  had awakened something. I kept attending the Yoga Class at the Y.  I kept standing in mountain pose, engaged in the deep breath, guided by my teacher.

Through the stillness, through the energy, through the breath, I began to see more clearly — despite the darkness within.   I began to look at life differently, and I began to listen.  And there it was.  An illumination.  Great Spirit was with me, speaking to my soul, and showing me more of my Self than I’d ever seen.  I saw the essence of me.  I saw new courage.  I saw that I was capable of releasing the old Self.  Spirit was breathing in me the strength to uproot and recreate in a direction I had never considered.